Heya ! I am feeling a bit sick today, I guess I needed some more sleep since I was back to Belgium.
Gosh, and I want to eat a lot of chocolate today, don’t ask me why (chocolate and tea make me drunk, let me drown my sorrow in these delicacies). Oh well.
Today’s subject will be something a bit different from the quadcopter.
I wanted to draw panoramic scenes a long time ago when the first photographic stuff was created.
So here we are today:

Perspective is something really messy if you can’t understand basics geometries and human’s perception. So let me explain it first so you can understand a bit how it works. You need to imagine your eyes like a camera.

Let me explain: horizon line is an imaginary line where sky and earth touch each other. For example, when you are above a tower, or underground, there will always be an imaginary line that will be at the height of your eyes! That’s the reference line when you want to draw something. If you look above, the horizon’s line will be below, and if you look down, the line will go up! I know, it’s very abstract but you need to understand that rule before going ahead.

2) The second thing you need to know are vanishing points.

When you can fully understand these type of perception, you can actually work on the spherical panorama view.

The Spherical Panorama is a view with 4 cardinal directions (North, Est, South, West) and an axis where the observer stand (above: Zenith, and below: Nadir). It is difficult to draw on this kind of “virtual reality” space because human’s eyes can’t perceive the deepness of an object unless being able to see it (you can’t exactly understand how deep a box is when you only see two faces for example). So, the best way to understand what you draw is to create a perspective grid.

1) How to create a spherical panorama grid?

Blender will be useful for this part. A 3D model will help us to determinate where is the position of the observer in the space. If we want the grid to be consistent with good proportions, the camera needs to be IN a giant room (a cube). That cube will be loop cut and sliced.
When the cube will be grid sliced, we need to create the opacity of the edge. In the “modifier” of the object, I can change it with the “Wireframe” option.

The object can now be duplicated many times outside of the first cube. That way, we can get a deepness sense of space. When several cubes are placed, I can now use the camera and get an “equirectangular panorama view” that will flatten our cube in 2D.

However, the background of the panorama is still gray so I want to change it. It will help me to know where is the ground and where is the sky. In the “world” tab, I can choose to change the surface. 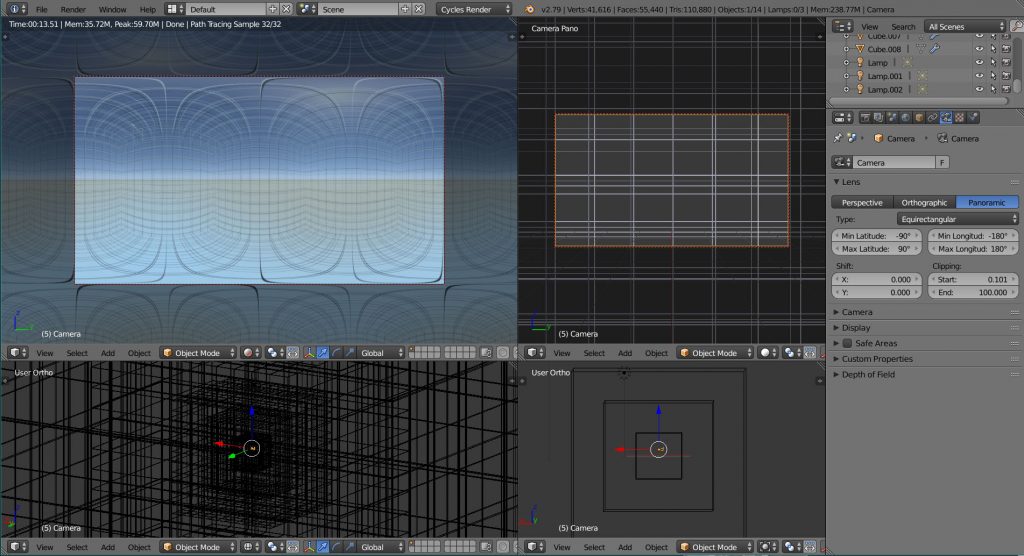 No, I can export the image in .jpeg. Ready to be used in photoshop!

2) Drawing in the Spherical Perspective Grid.

In photoshop CC2018, I can import some panorama layout (in the 3D tab). I still don’t understand how it is possible to draw in different layers because if you move in the 3D layout, the 2D layout won’t move accordingly.
So for now, I tried many things.

One working way to be able to draw on different layers is to check the “texture” tab in the layer options. I can double-click on the .Jpeg I created on blender. A different window will pop out with the 2D texture in the layer, then I can add another layer and work on it without modifying the Grid.

In many failures attempt, I finally get what I want!
If you want to check the result, click HERE.