I’m getting started with music theory. I don’t know yet if I’ll manage to go far into this subject but that’s something I always wanted to work on, mostly because it’s been a few years since I’ve had in mind to find a way I can express myself into (that’s also why I started to learn 3D). Music has been in my to-do list for a while and even if I started the guitar a few years ago (and did go to the academy of music at some point in my early life), I still feel I lack foundations in my musical knowledge to be able to produce, rather than reproduce.

I’ll start the subject by talking about basic notation in music, even though I needed to learn that when I was at the academy, let’s re-learn them since I think I forgot everything, or I don’t know the English names.

When writing a note, you’ll need a notehead (the round part, empty or filled-in), a stem and could have a flag, a dot or be tied to another notehead using a beam. 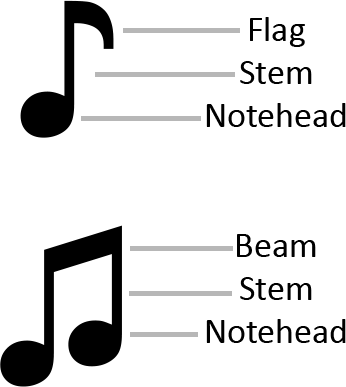 The staves (plural of staff) are the lines in the music sheet, they are there to convey the pitch information of the notes. There are generally 5 horizontal staves, evenly spaced.

The clefs are there also to convey pitch information and will allow giving the lines and spaces of the staves their correct pitch. The most common clefs are “treble” and “bass” but you can also find clefs such as “alto” and “tenor”.

The treble clef is not only the “sign” but also the position where it is at. To be exact, the treble clef here means it is a G-clef (????) at the second line on the staves.

The grand staff is two staves, one is a treble clef, the other is a bass clef. They are often used for piano and other polyphonic instrument.

Ledger lines are drawn when there are not enough lines in the staves to keep the information clear.

We can see there that there are four notes connected using a beam, with values all above the treble clef.

Accidentals are there to signal that a pitch has been lowered or raised.