#08 – Update on the quadcopter (Software side) 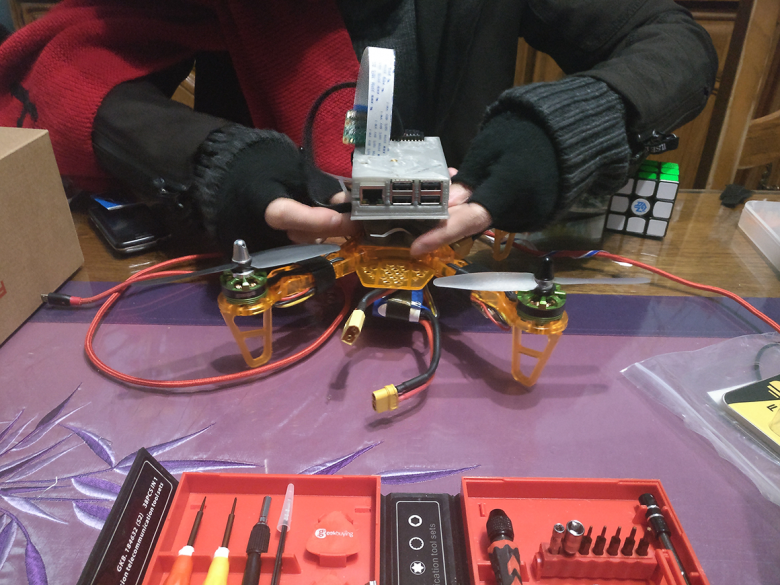 So, after we had to stop our drone building last time, Chu bought a new power distribution board and one new ESC (this time with a BEC/not OPTO) and the drone has been finished on the hardware side.

As I said last time, I still had some things to finish on the software side:

We had issues last week concerning the RC receiver that didn’t power correctly. The connections to the APM were not correctly made and I made sure to correct that (~ to signal, + on power and – to ground). I also had to connect a jumper between channel 3 and 4 (signal side) to activate CPPM mode as it is instructed in the manual. I spent a while finding out why I didn’t get any signal even though the receiver was connected correctly to the transmitter and the jumper was the issue.

Updating the firmware of the Transmitter (Taranis Q X7)

I had to update the firmware of the transmitter because the transmitter delivered was an EU version that didn’t have D8 mode (8 channel) for the transmission. After some quick googling we found out that it is a software limitation and we did, in fact, pick a good controller.

To update the firmware, I had to:

Calibrating the radio, accelerometer and compass

Pretty straight-forward, in Quick Setup go to radio and move the buttons on the controller to set the min and max values for the throttle, yaw, etc… For the accelerometer we have to follow the instructions and for the compass, I had to select the first compass in the Navio2 and disable the second one to do the calibration.

Calibrating the ESC and arming the motors

I followed some quick steps to calibrate the ESC and arm the motor:

Unfortunately, the quadcopter didn’t took off and could barely lift. We think it is due to a wrong choice of motors and we will do the change for another day.

Here’s a quick video of our attempt: