I am always in a stressful environment. No need to explain anxiety to those who know the feeling, for those who don’t, just imagine swimming in a pool with imaginary bloodlusted sharks. See the picture? Gosh, I really hope to come back home…

Still trying to figure out how to put bones in the right place. The article before this one got a big issue with the pictorial representation of the bones connexion between the humerus and the scapula. In fact, the scapula is linked with the acromion to the clavicle, so the parts with the scapula and clavicle move on his own as an intermediate part of the arm and the torso part.
For the second big issue, it is the position of the false ribs: like you know on the previous article, false ribs are ribs that are not directly connected to the sternum. So there are three couple of false ribs from the t8 to t10 included thoracic vertebra that is not floating ribs but two couples (t11-t12) are.  In my previous drawing, I only drew two couples in red for the false ribs (but the blue ones, floating (false) ribs are correct).

Let’s talk about the hips bones for today.
I won’t go very far for this article because I needed to check my previous drawing…
This part is a bit hard to imagine in 3d, so just try to keep in mind that it looks like a big ring where the sacrum is attached with two iliac crests and then connected again at the pubic bone. The femurs are placed on both sides of the pelvis via the acetabulum. 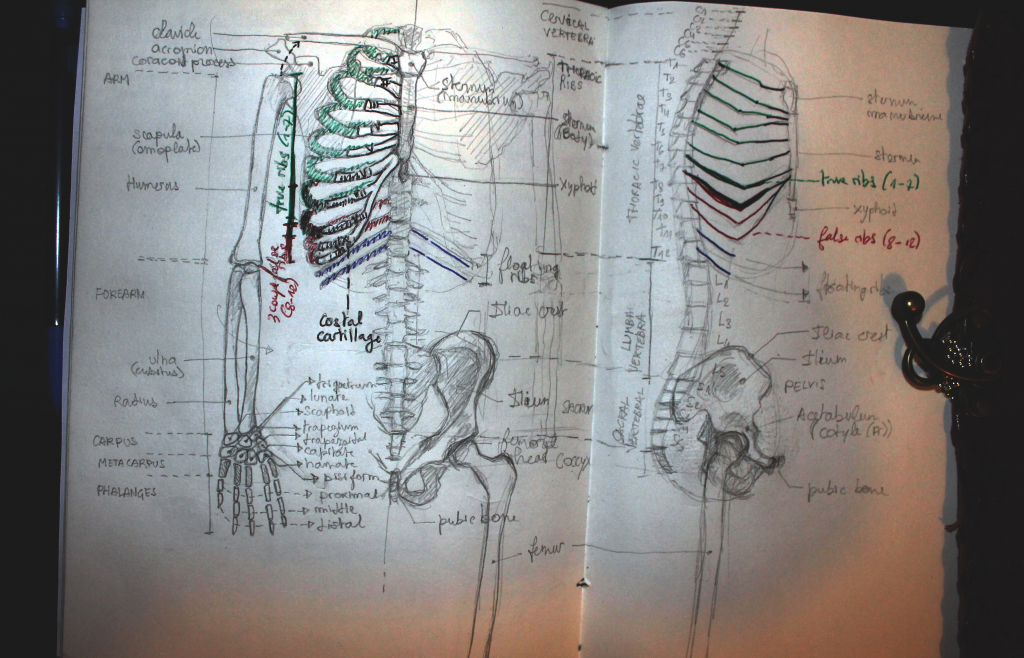 See you soon for the legs and feet parts (and the neck/head parts) of the skeletal drawing !