Hi guys,
I don’t understand a word of scripting and programming, so let’s learn something to make what I like: Dreamworld.
Dreamworld is a previous imaginary world I created when I was young. It was a world I used to build with concept art for the only purpose to get out of this reality world. However, reality can’t be escaped and I quickly dropped out the idea for a lot of reasons.
So, why do I want to build it back? I was just thinking about what defined me the most. I was never as good as I wanted to be in drawing or art, and whenever I thought I was, someone will give me a remember to keep my ego in check. So, how to get rid of this emptiness? What made me a dreamer? The only way I find is to get back to my root and make me what I am: conceptual ideas. Everyone can get an idea and for me, I like to work on an imaginary world and walking on weird paths. I was so lost recently because I was so lazy to try new things until I remembered that it is not the way I used to be.

Why do I want to learn programming?
1) Because I want my reality be less boring.
2) I want to learn data visualisation (what I can’t really do freely with excell).
3) I want to understand a different language I am not used to and be able to discuss with someone who know the language.
4) Build back my real life from the imagination by using programmation as a tool.

But oh well, I am getting too excited, let’s try to build Dreamworld again but step by step.
I don’t wanna put more stress on my shoulders.
You can see below the graphic interface, a window named “tk” just under the cat. 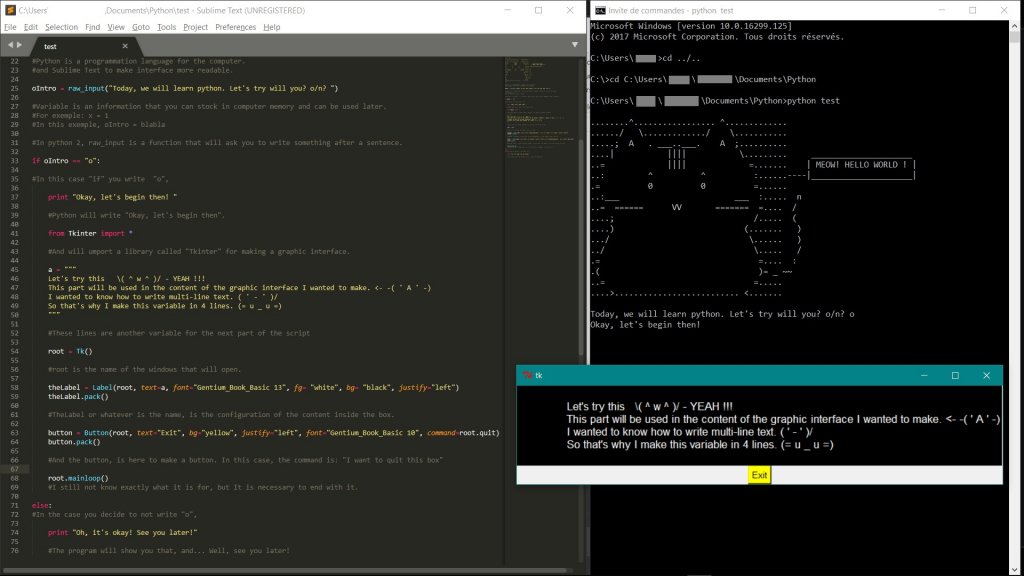 Here is the code and the explanations: